What 700x25 RoadTubeless tyre for my road bike?


My Dahon Mu P8 has been in service for over 5 years now.
It has now covered over 1000 miles in total, and it has required very minimal maintenance.

All of the modifications to the original specs have in the past included brakes, saddle and winter tyres. I also published about hints and tips to make life with the Dahon Mu P8 a breeze.

Those were the only changes I needed to make to increase the practicality and performance of my Mu P8 until 2014, when things changed.

I got a new job and my commute hasn't involved trains since.

This gave me the opportunity to make a few performance improvements aimed at reducing rolling resistance, increase efficiency, improve the gearing and make the bike lighter.

First of all, this latest version tips the scale at 10.8 Kg.

That means it's light enough to be taken into consideration as a substitute for a road bike when space is at premium, such as when travelling by plane or train over long distances.

It is also a much better looking bike, something not to hide in a corner but to put on show. It can now rival a Brompton.

But let's go through the list of improvements, one by one.

This was not an easy decision to live with: without a rack, my only option is now to carry items in a rucksack.

But even more importantly, without mudguards there's a risk I will get wet from the back down, and that grime will foul the seat post.

I still haven't found a solution that I am happy with at the moment, so I decided I will only use my Mu P8 when the roads are dry.

Although I found something that might be worth it while browsing the web: the Zefal No Mud universal mudguards. I might have to give them a try.


Originally I was considering a set of removable clipless pedals, like the MKS Ezy mm-Cube.

Unfortunately my budget wasn't allowing me to, so I decided to use a set of pedals I already had for touring, the Shimano A530.

That was a big mistake, since the flat part of the pedal is too slippery when wet, and I once went over the handle bars at a junction in London when my right foot slipped off the pedal while accelerating hard.

Since then, I have used these Shimano M424. They are not the lightest at over 500 grams, but are the safest I have used.
I might consider using SPD-SL pedals in the future since they provide a large enough platform to work with flat shoes, and normally weigh around 300 grams.

Although the original Dahon grips were ergonomic, they lacked something when riding really fast: they were essentially not allowing a more aerodynamic riding position, torso flat with the ground, without discomfort, just like any flat bar grips.

These, the Ergon GC2 (now superseded by the Ergon GP2) provide enough of a bar end extension, to allow a more aggressive riding style and out of the saddle comfort. They also don't interfere with the folding mechanism being pretty compact.

The original Schwalbe Marathon Supreme 20x1.6 were excellent tyres, reliable (only one puncture in their lifetime on the streets of London) and probably still the best for this bike, since they allow lower inflation pressures and therefore greater comfort.

But, they weren't the fastest! These are! The Schwalbe Durano P 20x1.10

At 27 mm wide on the original Dahon Kinetix rims, they are light, grippy and fast. The Dahon Mu P8 now feels very similar to a Brompton, although maybe a little less precise due to the inherent flex in the steering column.

I inflate them to 60 PSI at the front and 80 PSI at the rear; this gives me the best balance between speed and comfort on British roads.

The ride is not too harsh, but you must pay more attention to the road conditions, in particular potholes. Since my primary use for this bike now is training rides when away for business, I really do think it is a price worth paying.


I replaced the original and admittedly unreliable Neos 2.0 derailer and grip shifters, with a Shimano Sora rear derailer and Deore triggers.

This has made the biggest difference in terms of power transfer.

Going from 8 to 9 speed hasn't made a huge difference, although the more compact cassette (11-28T) now means smaller jumps between ratios, yet retaining a wide enough gear spread.

What had the biggest impact has been the more reliable shifting system provided by the Shimano road system.

The Sora derailer, the entry level of road components in the Shimano lineup, really does deliver consistent shifts fold after fold. There is no need to fiddle with the barrell adjuster anymore, and the trigger shifter delivers very crisps gear selections with minimal input.

Luckily again, this has not adversely impacted the bike folding mechanism.

The derailer is  compact enough a sits pretty tight against the frame, therefore still allowing a compact footprint and reducing the chances of damage when storing the bike on its side or against a wall.

To be able to fit the new derailer a couple of modifications had to be made.

For reference, I found the derailer hanger by visiting gearmechhanger.com and buying a D24 cast hanger.

The second modification was to take advantage of the hole left by removing the Neos derailer, and to clip the shifter cable to the frame: this allows the cable to follow a natural path to the derailer and won't foul the folding mechanism.

All of the above was absolutely unnecessary, but just so worth it!

I grew up in Italy, a country where a coffee grinder and espresso machine is as popular in the kitchen as a kettle is in Britain.

Over the years I've learnt to love the different varieties and flavours.

And as cyclists, it becomes part of our lifestyle.

But there's a point where too much coffee is bad for you.

If you, like me, think you have hit that point (6 espresso's a day?) then I'll share the ingredients to my detox cure for coffee addiction.


Plenty of it. So much that for the first few days you will be urinating a lot and feel bloated perhaps.

You don't need to drink so much as to be ill but for a couple of days at the start of your detox programme, you need to be fully hydrated to cope with the withdrawal symptoms of not drinking coffee.

Oh yes, I forgot to mention this: while detoxing you must not drink coffee.

You will have bad headaches, probably in the middle of the day, when your focus is most needed. And when the temptation to reach for the espresso machine is the strongest.

Drinking a lot of water at this critical stage will help your body recover quicker from the headaches.

The second ingredient: will power.


That's not to say you are not allowed any coffee at all. But you must have a plan and stick to it.

My plan when weaning off an addictive substance or activity (bike maintenance can be very addictive), is to half it every day.

When I recently detoxed from 6 espresso's a day, this was my plan:


Day 1) Drink plenty of water but still have up to 6 espresso's.

Day 2) While drinking more water still, now only allow up to 3 espresso's.

If it helps you, when you need that extra cup, close your eyes, and imagine you make yourself a virtual espresso, sip it, taste it, and recall the sensation of coffee on your tongue and your throat.

Apply the virtual coffee making exercise as above, but instead of drinking the coffee, throw it away. This will reinforce the message in your mind that coffee is bad for you.

In order to get a good night sleep while detoxing, and even afterwards, why not try my suggested meditation for cyclists?

Before going to sleep tonight, I'm going to listen to the Emerald Waterfall Meditation by Master Co.

Listen to the guided meditation, and you will have a better rest tonight.

Through this guided meditation you will experience a full body relaxation and deep energetic cleansing using green prana.


If you use any Health apps such as Sleep Cycle or Instant Heart Rate, you can probably track your sleeping profile and heart rate over the next few nights and days, and hopefully will find a much better sleeping quality, and a lower heart rate too as a result.


I certainly have, and the metrics in Sleep Cycle confirm that for me. 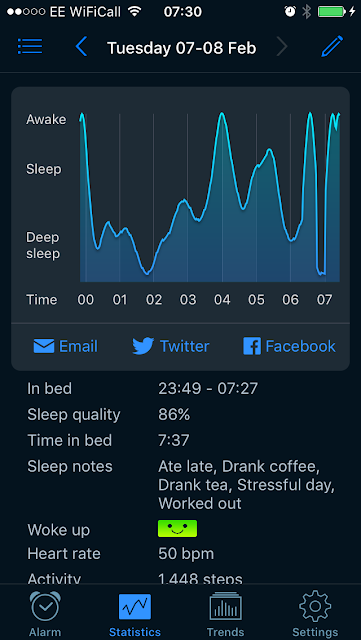 Even though I drank tea and coffee and had a stressful day at work, instead of having a restless night, I was able to fall asleep quickly and get some real quality sleep

Try it. You'll thank me later.


Note: even on an iOS device you can simply go this link and listen to the guided meditation without downloading the file.